WASHINGTON – In response to the Biden Administration’s release of the Treasury report on alcohol, Beer Institute President and CEO Jim McGreevy released the following statement:

“We are disappointed by the Administration’s mischaracterization of the thriving American beer industry. The American beer industry is one of the most vibrant industries in the country. Since 2010, we have seen more than 10,000 new breweries permitted, and today–from agriculture and manufacturing to construction and transportation, the beer industry supports more than two million American jobs and contributes more than $331 billion to the nation’s economy. Consumers are benefiting from the growing number of brewers and beer importers, with more choices for beer than at any other time in our nation’s history.

Even with the COVID-19 pandemic, which resulted in a nearly $20 billion reduction in retail beer sales and a loss of nearly 570,000 jobs that depend on the beer industry, our nation’s brewers and beer importers continue to invest in their communities, support local jobs, and aid people in need.

Despite being one of the most regulated industries in the United States, the beer industry is experiencing an unprecedented level of healthy competition. It will continue to grow and innovate so it can best serve the millions of Americans who make beer America’s favorite beverage alcohol.”

Recent Bureau of Labor Statistics data shows that beer prices have remained low even during a historic period of inflation. This trend of low beer prices continued last year, as beer’s Consumer Price Index (CPI) trailed overall CPI 1.8% to 4.7% on average in 2021. 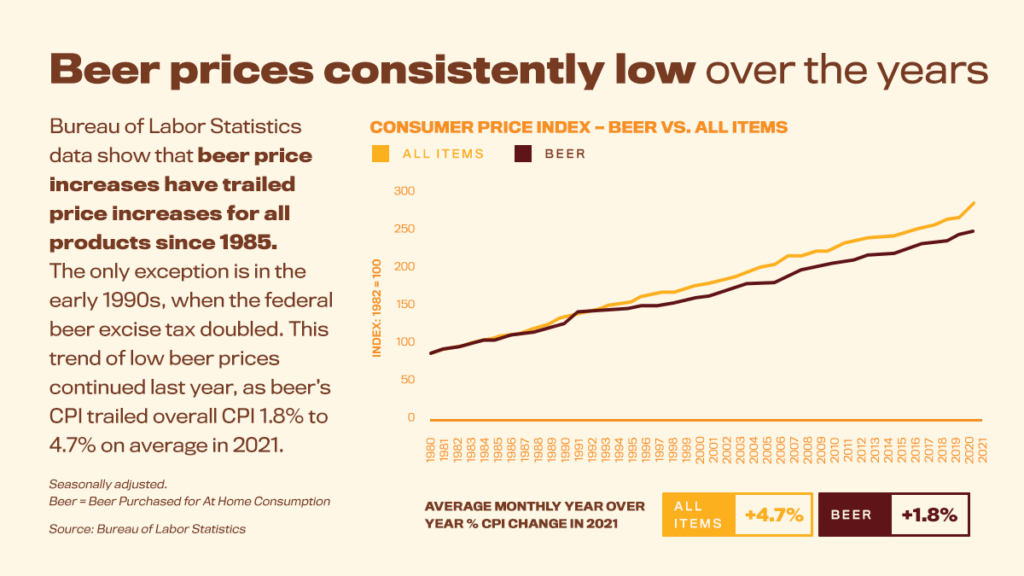 The Beer Institute’s comments to the Alcohol and Tobacco Tax and Trade Bureau rulemaking docket can be viewed by clicking here.