As lawmakers head back to Washington for the end of the 116th Congress, a bipartisan majority of Americans agree two beer-related issues are priorities.

WASHINGTON—Today, the Beer Institute released the results of its latest nationwide polls, with 63 percent of American voters supporting Congressional action to provide permanent federal excise tax relief for brewers and beer importers. Further, 72 percent support Congress opening an investigation into the American aluminum market. The backing for both proposals extends across all political ideologies, with the majority of Republican, Democratic, and Independent American voters in favor.

“Beer brings together Americans across the political spectrum, and American brewers and beer importers support millions of jobs across our nation. As lawmakers head back to Washington to close out the 116th Congress, a bipartisan majority of Americans agree members of Congress should make excise tax relief for the beer industry permanent and open an investigation into the U.S. aluminum market,” said Jim McGreevy, president and CEO of the Beer Institute.

“The COVID-19 pandemic has weighed heavily on our economy, including brewers and beer importers who have faced significant economic losses from the closure of bars, restaurants, taprooms, and sports venues. Making tax relief permanent will ensure brewers and beer importers have the long-term tax certainty to stay open, innovate, and reinvest in their businesses. Investigating the aluminum market will bring to light why brewers are paying a tariff-price for recycled aluminum already in the United States. These two commonsense proposals enjoy broad support from Americans across the political spectrum, and we look forward to members of Congress passing them before the end of the year.”

In its polls, the Beer Institute found:

Making federal excise tax rates permanent for all brewers and beer importers is one of the most popular pieces of legislation in Congress. A record number of members of Congress have cosponsored the Craft Beverage Modernization and Tax Reform Act (S. 362/H.R. 1175), with 346 members of the U.S. House of Representatives and 74 U.S. Senators supporting the legislation. Introduced by Senators Ron Wyden (D-OR) and Roy Blunt (R-MO) and Representatives Ron Kind (D-WI) and Mike Kelly (R-PA), this legislation would make the excise tax relief for brewers and beer importers contained in the Tax Cuts and Jobs Act permanent. Last December, Congress voted to extend the tax relief for one year. Without congressional action, America’s beer industry will face a $154 million tax increase on January 1, 2021.  Large and regional brewers will see their excise tax payments go up by an average of four percent while 99 percent of U.S. breweries will see their excise taxes double.

In addition to the broad spectrum of members of Congress who support making the current excise tax rates permanent, there is also strong bipartisan support for investigating the U.S. aluminum market.

On March 23, 2018, President Trump formally imposed a 10 percent tariff on all imported primary aluminum, including from allies such as Canada.  Due to a combination of these tariffs and a complicated, obscure pricing system known as the Midwest Premium, brewers of all sizes have seen their aluminum prices skyrocket since the implementation of the tariffs.  Further, brewers have been forced to pay a tariff-price on recycled aluminum already in the United States.

According to a study released in March by Harbor Aluminum, from March 2018 through December 2019, America’s beverage industries paid an additional $582 million on the 3.06 million metric tons of aluminum it purchased. However, the analysis concluded that the U.S. Treasury only collected 14% of this sum, totaling about $81 million. The reason for this discrepancy was that brewers paid a tariff price on all the aluminum they purchased, even recycled aluminum already in the United States.

The nationwide surveys, by Quadrant Strategies, were conducted August 21, 2020, to August 23, 2020, each with 1,000 Americans over the age of 21. Respondents were demographically representative based on the Census. 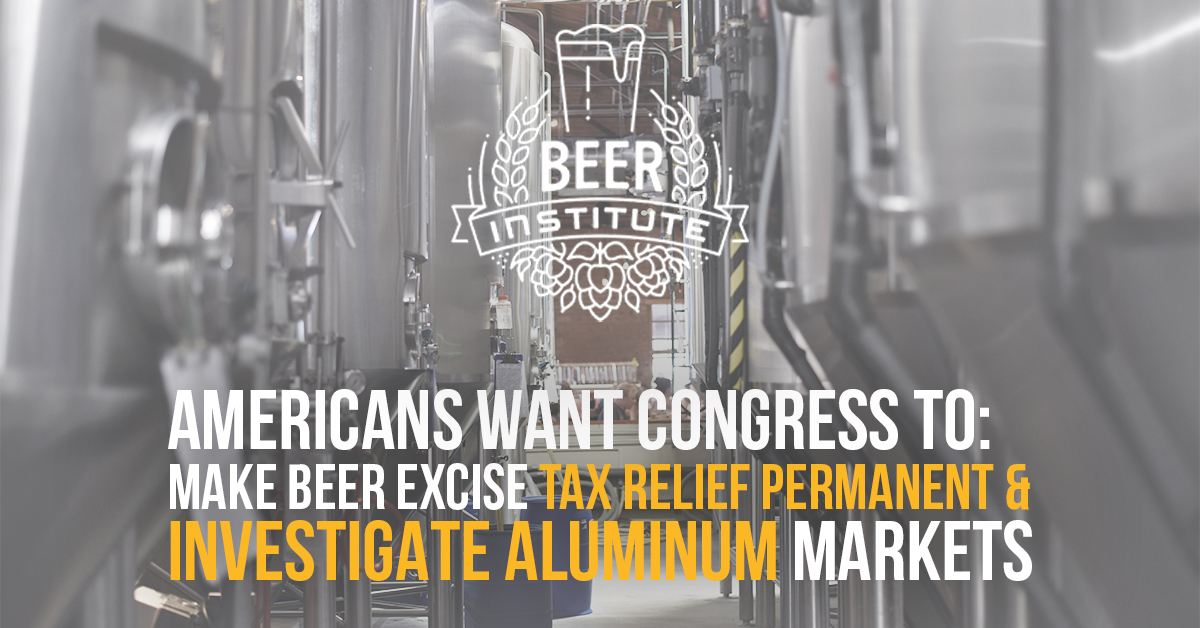