The American Beer Industry Is More Than Amber Waves of Grain

This article originally appeared on Bloomberg Tax on September 2, 2022.

What image comes to mind when you think of a job in the beer industry? Maybe it’s a union worker on the bottling line of one of America’s oldest beer brands—the same brand that your grandfather drank 50 years ago. Perhaps it’s your local craft brewery offering taproom samples of their latest limited-edition microbrew. Maybe it’s the shopkeeper behind the counter at your local liquor store, offering sage advice on the dozens of new beers filling the refrigerator.

The US beer industry represents these images and so much more. From hops and barley farmers to truck drivers, restaurant servers, and retail clerks, the beer industry now supports more than 2 million American jobs. Collectively, the 6,600 tax-paying brewers and beer importers counted by the US Department of the Treasury directly create nearly 70,000 jobs in America, including many union jobs. Beer also contributes to approximately 108,000 agricultural and manufacturing jobs, which provide the necessary grains to brew beer and the cans, bottles, and kegs needed for packaging.

After beer leaves the brewery, it is delivered to bars, restaurants, stadiums, and grocery stores by more than 140,000 workers at beer wholesalers and distributors. Beer also creates more than 875,000 retail jobs across the US, all responsible for delivering your fresh, cold draft to your table or six-pack to your shopping cart. These jobs across the industry generate more than $100 billion in wages and benefits for workers and their families, as well as $55 billion in taxes at the federal, state, and local levels. All told, the beer industry contributes $331 billion in economic impact in the US. This massive impact accounts for approximately 1.6% of our country’s gross domestic product.

Despite beer’s far-reaching impact on the US job market and economy, it is facing challenges. Beyond the Covid-19 pandemic—including the nearly 600,000 direct and indirect jobs lost—the beer industry faces other pressures that impact brewers and the millions of jobs it creates. Increased supply chain and commodities issues and soaring inflation have compounded these problems.

With the rising popularity of alcohol beverages in cans over the past decade, more than 70% of beer produced in the US comes in aluminum, totaling 41 billion cans annually. Aluminum is the single most significant input cost to brewers, and these costs are only driven higher by Section 232 tariffs on aluminum, originally instated by the Trump administration. These tariffs have created enormous burdens on the American beverage industry, which has paid more than $1.4 billion in tariffs since 2018.

Frustratingly, most of the dollars paid ostensibly in tariffs never make it to the US government. Only 8% of the $1.4 billion remitted in tariffs since 2018 went to the Treasury Department. The remaining 92% went back into the pockets of third-party companies in the aluminum industry who charge end users, including the beer industry, a tariff-laden price regardless of the metal’s recycled content or country of origin. To combat this burden, the Beer Institute is working on behalf of brewers of all sizes across the country to urge the Biden administration to remove Section 232 tariffs on aluminum. With the US inflation rate at its highest in 40 years, Section 232 tariffs add an unnecessary strain on manufacturers, and those costs ultimately trickle down to consumers. At a time of historic inflation, this is one more cost increase Americans can’t afford.

The beer industry and consumers also face a threat from the liquor industry, seeking tax cuts in state legislatures nationwide on canned cocktails, also known as ready-to-drink beverages, which large out-of-state companies often produce. Despite efforts to blur the lines between beer and liquor, the facts speak for themselves. Beer is unique in its production process, distinct in its manufacturing and distribution costs, and perishable. Consumers also view and consume beer differently than other alcoholic beverages. 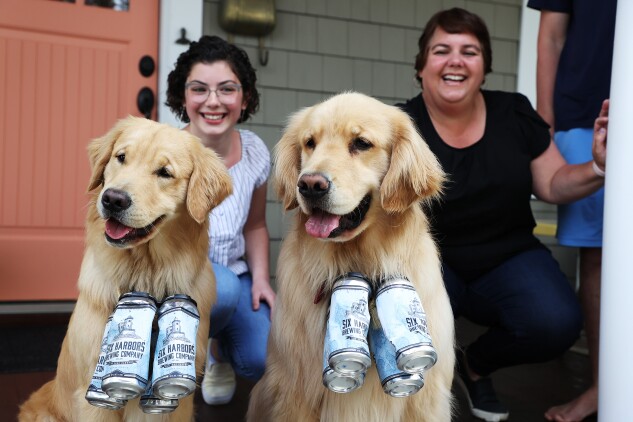 Lisa Fascilla, with children Nina and Alex, receive a beer delivery from Karen and Mark Heuwetter and their two dogs, Buddy and Barley, on May 3, 2020, in Huntington Village, N.Y.

Tax and regulatory frameworks at the federal and state level reflect this differentiated reality, relying on both the alcohol content and the base alcohol of the product to determine tax rates. In 2017, Congress reinforced the inherent differences between types of alcohol when it enacted the Craft Beverage Modernization and Tax Reform Act—which reduced federal excise tax rates for beer, wine, cider, and liquor—as part of the Tax Cuts and Jobs Act.

Despite these headwinds, the American beer industry is thriving, with more breweries and options for consumers than ever before.

America’s favorite alcohol beverage, beer, has had a special place in our country’s past, present, and future. Americans, including several of our Founding Fathers, have been brewing hops and barley for more than 300 years. While the techniques and the tastes have changed over the years, the beer industry has cemented itself as an iconic part of American culture. As we celebrate Labor Day, please lift your glass and toast the more than 2 million Americans working hard every day to make sure you can enjoy a cold, refreshing beer!

This article does not necessarily reflect the opinion of The Bureau of National Affairs, Inc., the publisher of Bloomberg Law and Bloomberg Tax, or its owners.